Will the Miami Beach rapid transit connection being built as part of the SMART plan be Monorail, PRT, or something else? Located on the MacArthur Causeway or Julia Tuttle?

Miami-Dade officials held a public kick-off meeting on Monday where they provided an update on plans to build the Beach Corridor rapid transit system connecting Miami Beach and the mainland. Those questions are now being studied, they said.

The county completed a Tier 1 analysis of the project in August, and commenced Tier 2 as of that date, they said. The Tier 1 study began in May 2017 and took 15 months to complete.

In the Tier 1 analysis, eight possible technologies were analyzed. Two possible options were eliminated: Aerial Cable Transit was rejected due to lack of modal integration, low speed, insufficient capacity, safety, and impacts to viewsheds. Heavy Rail Transit was also eliminated because of impacts to historic/downtown properties (due to required turn radii), and cost/feasibility.

In the Tier 1 analysis, Miami Avenue was identified as the preferred corridor on the Miami side. The analysis also eliminated was the possibility of building at grade on the south side of I-395, since it would remove a traffic lane.

For Tier 2 analysis, the technologies being evaluated are Monorail, Metromover/AGT, BRT/Express Bus, LRT/Streetcar, and Personal Rapid Transit (PRT was not included in Tier 1 analysis). The expanded Tier 2 also will study the possibility of placing the link on the Julia Tuttle Causeway connected to the Convention Center, instead of via the MacArthur Causeway.

The county schedule assumes an Environmental Impact Statement process with a locally preferred alternative identified in the Summer of 2019. The Locally Preferred Alternative then moves through the federal National Environmental Policy Act requirements for ultimate entry into the Federal Transit Administration funding process in the Summer of 2020. 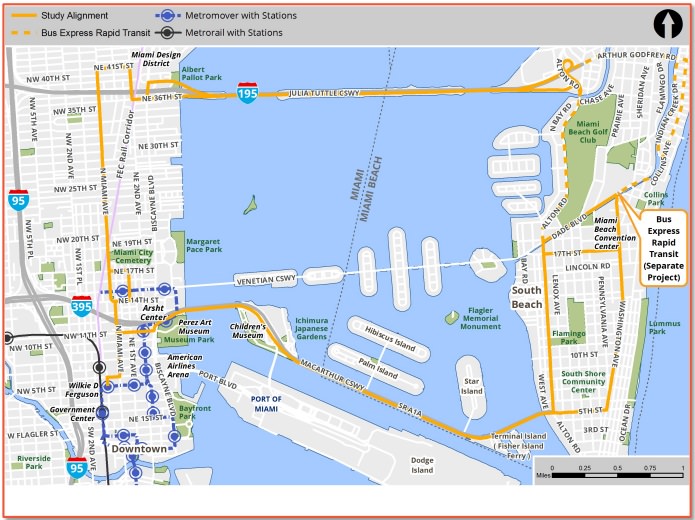 The presentation made to the public on Monday: