Brickell City centre is now confirming that an Apple Store is coming to the mall by adding them to the mall directory on their website.

Although permit applications have shown a two-level Apple Store, the mall has never publicly announced the store.

Brickell City Centre also announced today that for a limited time, visitors will be given two hours of free parking.

In addition, several Uber dropoff points have been designated throughout the project.

Visitors to the mixed-use project will find easy access to their favorite retail and restaurants via dedicated Uber drop off zones as well as complimentary two-hour parking at its underground parking garage.

“Transportation and seamless access to Brickell City Centre has always been a priority for Swire when developing the project; from renovating the eighth street MetroMover to implementing the infrastructure for an underground garage,” said Kieran Bowers, president of Swire Properties, the developer behind Brickell City Centre. “Our partnership with Uber will leverage the convenience and reliability of ridesharing, enhancing transportation options and the overall experience at Brickell City Centre.”

Official pick-ups will begin immediately. First-time riders can use the promo code BrickellCityCentre to get their first ride free, up to $20. Find out more about Brickell City Centre and Uber’s partnership at www.uber.com/info/brickellcitycentre/.

“Uber is excited to partner with Brickell City Centre, one of the largest mixed use developments in the world, to offer visitors and residents a safe, reliable, and accessible ride,” said Kasra Moshkani, general manager of Uber South Florida. “As Miami continues to grow, and transportation becomes a bigger challenge for people, Uber will continue using our technology to take cars off the road and improve the everyday lives of South Florida residents.” 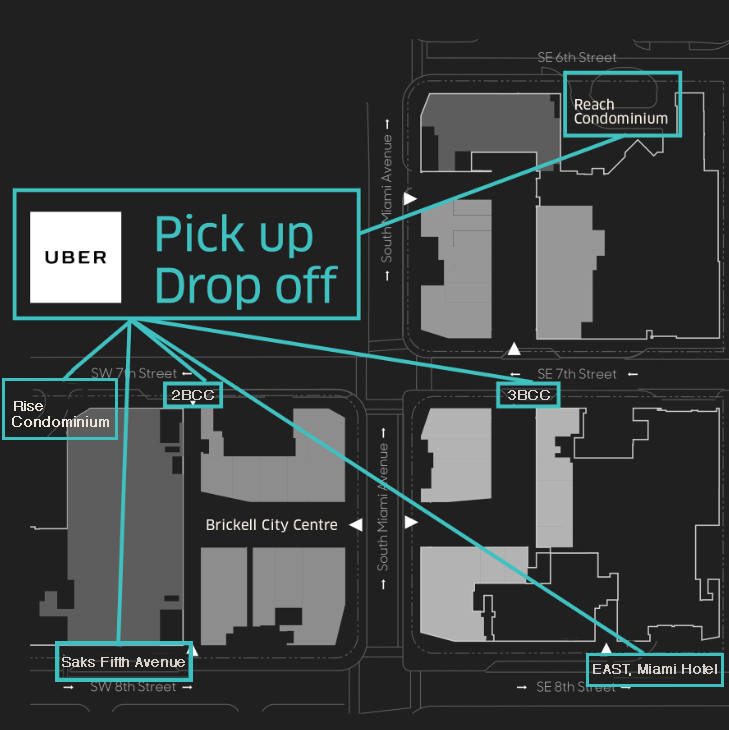