Aria On The Bay is more than halfway to top off at 53-stories. Developer Melo Group says that 75 percent of units are in hard contract (compared to 70% six months ago).

From Biscayne Bay to the Big Apple:

Melo Group’s 53-story luxury tower is on track for delivery in early 2018.

MIAMI, FL – December 5, 2016 – As the U.S. economy gains strength and New York buyers look to acquire real estate assets in domestic markets offering a comparative value, one of Miami’s fastest-rising condos is taking its sales campaign to the Big Apple. Aria on the Bay, a 53-story luxury condominium now underway in Downtown Miami’s Arts & Entertainment District, has secured registration to sell its remaining units in New York. The news comes as vertical construction of the building reaches the 34th floor, with about 75% of its 648 units already sold and under hard contract. Construction of the waterfront tower, quickly rising at 1770 N. Bayshore Drive along Biscayne Bay, is on track to top-off in April 2017 and be completed by Q1 2018.

“When you compare the top markets in Miami to New York, Miami is an incredible value at a third of the price,” said developer Carlos Melo, principal of the Melo Group. “Aria on the Bay offers buyers a luxury product on Miami’s waterfront in a walkable, family-friendly neighborhood surrounded by world-class cultural attractions – plus the lifestyle benefits of lower taxes and amazing weather year-round.”

Aria on the Bay includes one- to four-bedroom condos, as well as exclusive three-story upper penthouses with private pools, priced from the $400,000’s to about $6 million. The tower’s prime bayfront location will provide residences with unobstructed views of Biscayne Bay, Miami Beach and the city skyline. With unit prices averaging about $550 per square foot, Aria on the Bay offers an unmatched value for quality new construction in Downtown Miami.

“Miami has a long history of welcoming New Yorkers,” said Alicia Cervera Lamadrid, managing partner of Cervera Real Estate, the project’s exclusive sales and marketing brokerage. “With its spectacular weather, easy commute and exceptional value proposition, Miami is the perfect choice for New Yorkers. At Aria on the Bay, we’ve seen an uptick in interest coming from buyers in the northeast looking for both second homes and vacation properties, including end-users who want to live in Miami for at least part of the year. They’re attracted to the project’s setting in the center of Miami’s thriving urban core – with places like Brickell, the Design District, Midtown, Wynwood and Miami Beach all just minutes away.”

Aria on the Bay is situated in downtown Miami’s burgeoning Arts & Entertainment District, which is home to some of South Florida’s top destinations for arts and culture, entertainment, dining and shopping. The building’s future residents will live within blocks of world-class venues such as the Adrienne Arsht Center for the Performing Arts, Museum Park’s Perez Art Museum Miami (PAMM) and the soon-to-open Patricia and Phillip Frost Museum of Science, and the AmericanAirlines Arena. Also nearby are dozens of luxury retail shops and restaurants in the Miami Design District, Midtown Miami, Brickell City Centre, and the upcoming Miami Worldcenter project. Several public transit and alternative transportation options are within walking distance, with trips to South Beach and the Brickell Financial District only a few minutes away. Residents will also have access to Miami Beach via a pleasant 10-minute bike ride over the Venetian Causeway, located just two blocks from the property.

Aria on the Bay’s innovative architecture, interior and landscape designs are entirely the creation of internationally-acclaimed design firm Arquitectonica. The project’s opera-inspired name serves as a nod to its Downtown Arts & Entertainment District location, surrounded by Miami’s cultural and arts institutions. The glass structure’s smooth architectural design and scalloped façade was influenced by the shapes of the wave crests in Biscayne Bay, combined with a series of curving balconies found in some of the world’s greatest opera houses.

Since arriving in Miami from Argentina in 2001, Melo Group’s father-and-sons team – led by Jose Luis Melo and his two sons Carlos and Martin Melo – has been a driving force behind the city’s real estate resurgence, with Aria on the Bay marking the firm’s 14th residential tower to be developed in the Greater Downtown Miami area. With its fully-integrated approach that takes projects from development to construction, the family-owned firm boasts over 60 years of experience in the real estate development industry and a commitment to delivering quality product. 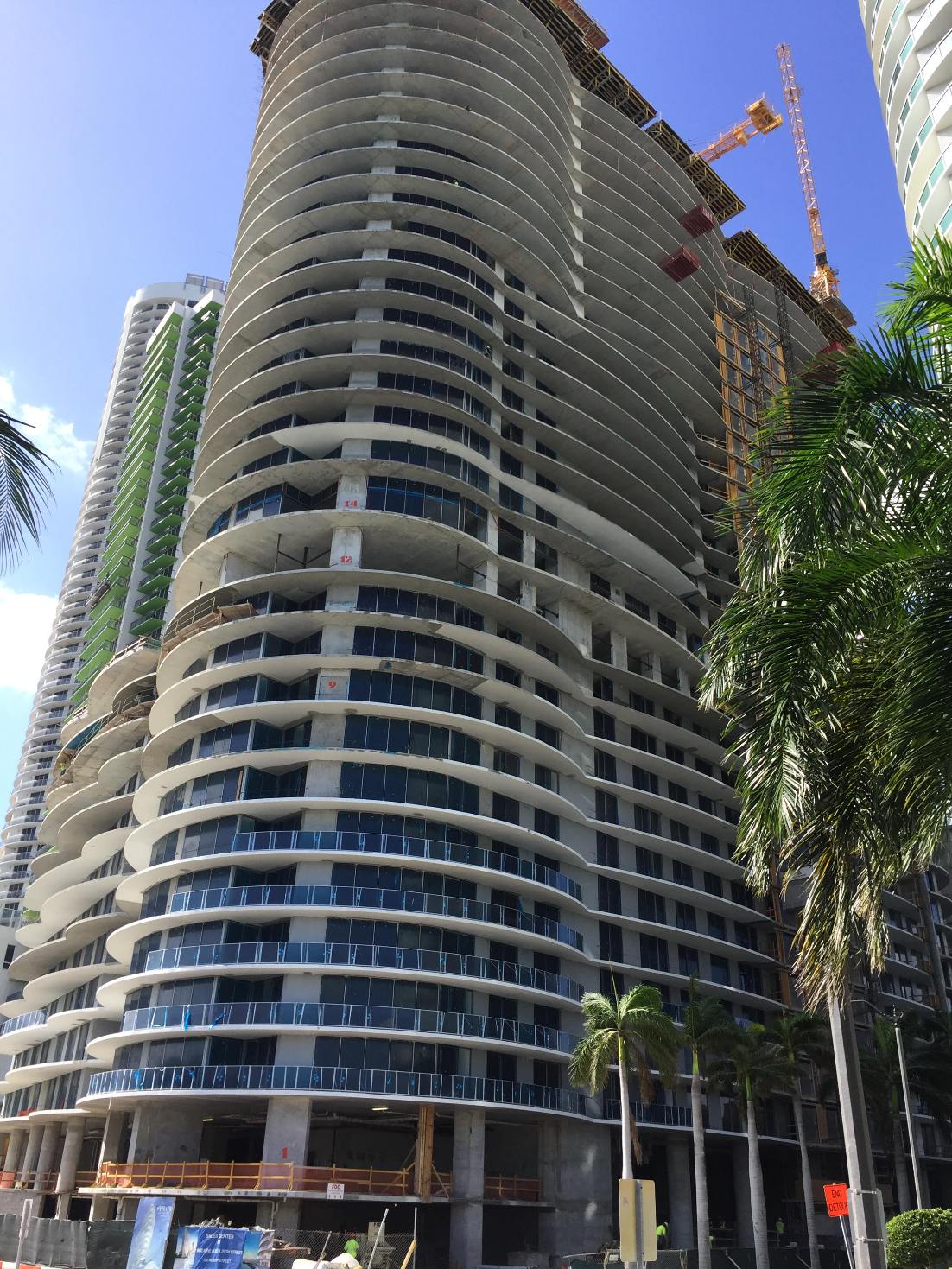