Update: The full plans have now been revealed.

Miami International Airport officials are set to unveil plans this week for a massive renovation and expansion plan that will cost billions.

Officials say the expansion will set the stage for an era of growth at the airport, and improve the customer experience.

The capital improvement plans will cost between $4 and $5 billion, and take between 5 and 15 years to develop between now and 2035.

Central Terminal – A renovated check in hall will include a raised ceiling, allowing for more natural light. There will also be additional circulation and queuing depth for check in counters, similar to the North and South Terminal.

A larger, centralized security checkpoint will serve both Concourses E and F. New concession areas will be built past the checkpoint, along with larger holdrooms and new concession space in Concourse F. Passengers will have access to all gates behind security.

Concourse G is to be demolished.

North Terminal – Gates will be optimized to accommodate new aircraft. American Airlines has informed the airport of plans to retire the Boeing 767. The aircraft parking plan between gates D14 and D37 will be updated to accommodate wider aircraft such as the 777-300 The North Terminal frontage will be optimized for narrow-body and widebody aircraft, which are available in AA’s fleet beyond 2022.

Regional Jet Facility (North Terminal) – known as the Gate D60 Project — AA’s “American Eagle“ commuter facility (located at Gate D60 in Concourse D) will be upgraded to house an increasing number of flights by larger regional jets. Currently, these aircraft create congestion inside the terminal and on the ramp. Gate D60 will be renovated to accommodate the largest regional jets, as well as narrow-body aircraft, and will also provide spacious holdrooms with new concession offerings.

South Terminal – The South Terminal will be expanded to accommodate three new jumbo aircraft gates, including an apron expansion that will provide aircraft parking for an additional three widebody jets.

Two New Hotels – In a plan reminiscent of last decade’s “Airport City” proposal, two new hotels will be built on airport grounds, to be developed privately through competitive bidding.

Both will be connected to the MIA Mover train system as well as the terminals.

The first hotel will be built at the existing short-term parking deck and former heliport, an area that is a transit core in front of the MIA Mover station. It will include a  business and conference center with exhibition space, premium meetings rooms and an auditorium.

The second hotel will be in front of the North Terminal, east of the Dolphin Garage. It will also be accessible by the MIA Mover.

Other plans include Cargo expansion, new roadways, a parking garage, and other facilities.

Older plan for Airport City by Zyscovich Architects. Now, hotels will be built east (as before) and west (new) of the long term garages, but no development will take place on an easterly parcel at the airport’s entrance: 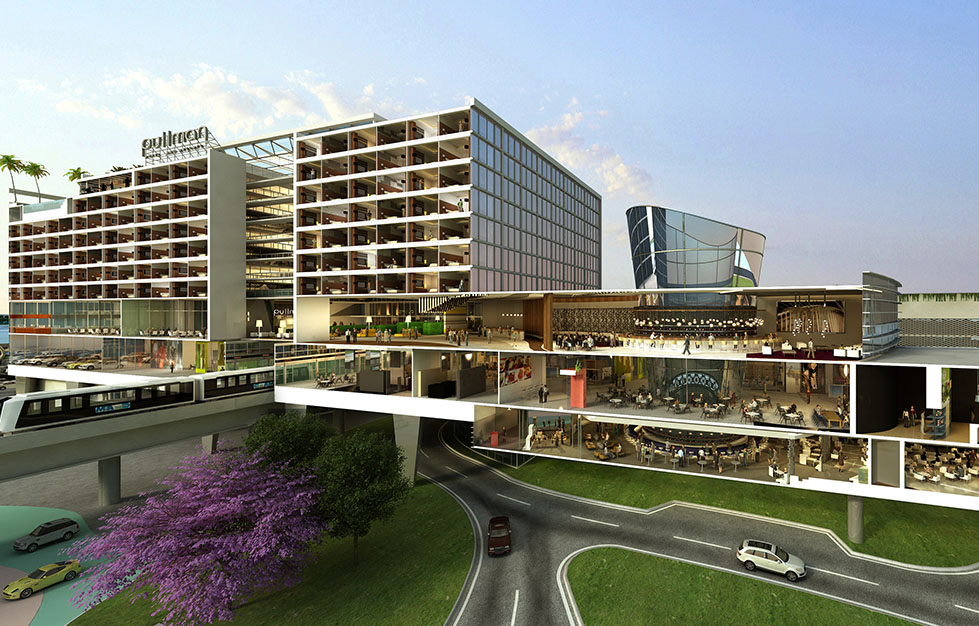 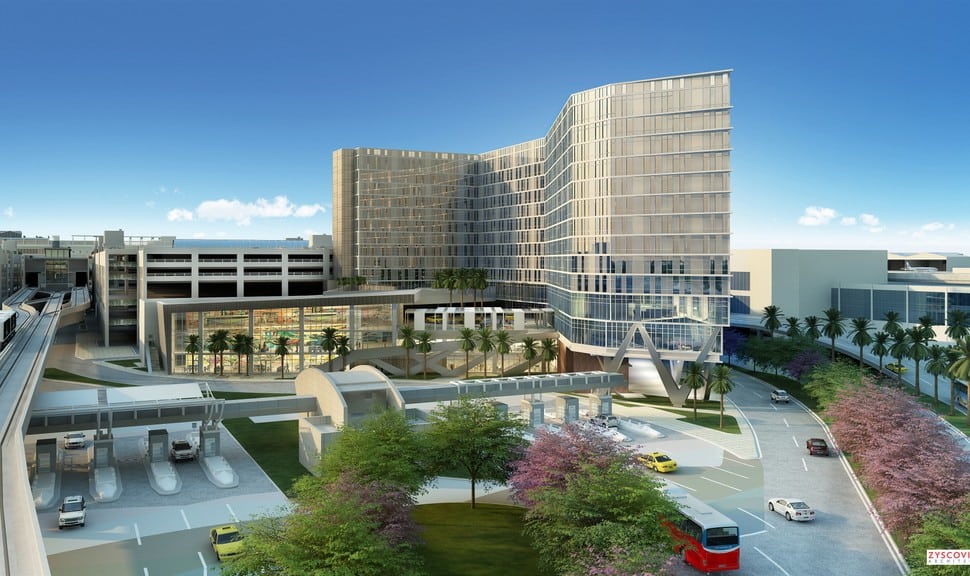