China City Construction Corp. is one step closer to building the tallest tower in Miami.

Company officials traveled to New York on Monday to ink a deal with Arquitectonica for design work on a twin-tower project at the Capital at Brickell property. China City bought the vacant 2.78-acre site last year for $74.74 million.

China City wants to build the tallest tower in Miami, but it depends on several factors, including FAA height restrictions.

The company says that the project could top out at as high as 1,069 feet, taking the title of tallest in Miami thanks to newly eased height restrictions in the area. At that height, it would pass Tibor Hollo’s under-construction Panorama Tower, which is on track to become the city’s tallest tower in 2017 at 830 feet above sea level. Hong Kong-based Swire Properties received approval recently to build One Brickell City Centre at 1,049 feet.

It isn’t clear if both Capital at Brickell towers would reach the 1,069-foot height.

When completed, the project will include a hotel managed by a luxury operator such as Shangri La, Kempinski, or Aman Resorts. The total project size is expected to be 3.6 million square feet.

China City also said that they will build a beach club in South Beach. Guests of the Brickell property will be able to use the club, which China City says is just a fifteen minute drive from the Brickell project. It will be built on six acres of land that they are calling the last developable beachfront parcel in South Beach. The location of the property wasn’t specified.

Update: China City representatives want to clarify that the rendering below is purely conceptual. Now that Arquitectonica has been hired, the design process will begin with a programming stage to determine areas and uses.

The 1,069-foot height is also hypothetical, and depends on multiple factors including the FAA. 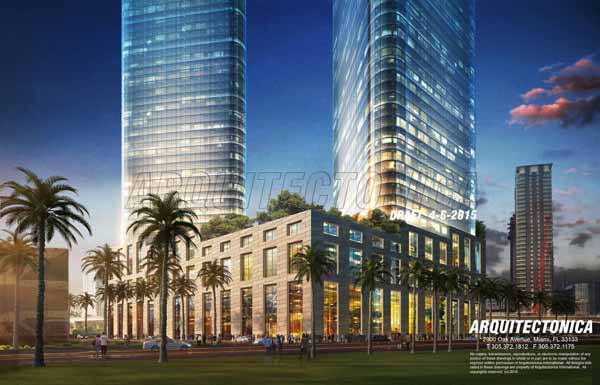