According to a press release by the county, construction will begin by 2024.

The system will still be elevated, heavy rail along the same route up Northwest 27th Avenue, according to the Herald.

However, it will skip building stations along the route in the first phase, in order to accelerate the start of construction.

Only one station will be built – at the end of the route, by Hard Rock Stadium.

The County also will build out the system itself, instead of seeking a private-public partnership.

The second phase will see the remaining seven stations built out along the route. Transit-oriented developments will also be built in the second phase.

Here is a press release from the county:

MIAMI-DADE ( November 15, 2022 )– Today, the Miami-Dade County Board of County Commissioners approved a motion to accelerate the development of the North Corridor, one of six transit corridors highlighted in the County’s SMART Plan. This accelerated solution would provide residents a seamless transit experience by extending the county’s existing Metrorail system along NW 27 Avenue from the Martin Luther King Station to County Line. The accelerated schedule adopted today is also the preferred alternative of the County’s Transportation Planning Organization.

“World-class destinations boast world-class public transit,” said Mayor Daniella Levine Cava. “With today’s vote, we are connecting residents and visitors alike to North Miami-Dade and with this accelerated schedule, we’re developing this corridor faster than we ever thought possible.”

The accelerated timeline would require the Florida Department of Transportation to expedite completion of the project’s National Environmental Policy Act (NEPA) processes. The Department of Transportation and Public Works (DTPW) professional staff would initiate engineering design and several project processes in parallel, allowing the County to initiate the first phase of construction by 2024.

“The bold don’t live forever and the timid don’t live at all,” said Vice Chairman Oliver Gilbert. This is our bold attempt to deliver on a 30-year promise to the community.”

Phase I of the anticipated North Corridor development would include an 8-mile extension of the Metrorail to the Hard Rock Stadium at NW 199th Street. Phase II would include the construction of additional stations throughout the corridor as well as several new transit-oriented developments.

Once fully developed, the North Corridor project will connect riders to many of the County’s anchor institutions including Miami-Dade College and the Hard Rock Stadium. The total project investment is currently estimated at $1.9B and will be funded in part by Miami-Dade County and the Florida Department of Transportation (FDOT). Furthermore, Miami-Dade County will aggressively pursue federal opportunities to support the project.

Where stations are planned: 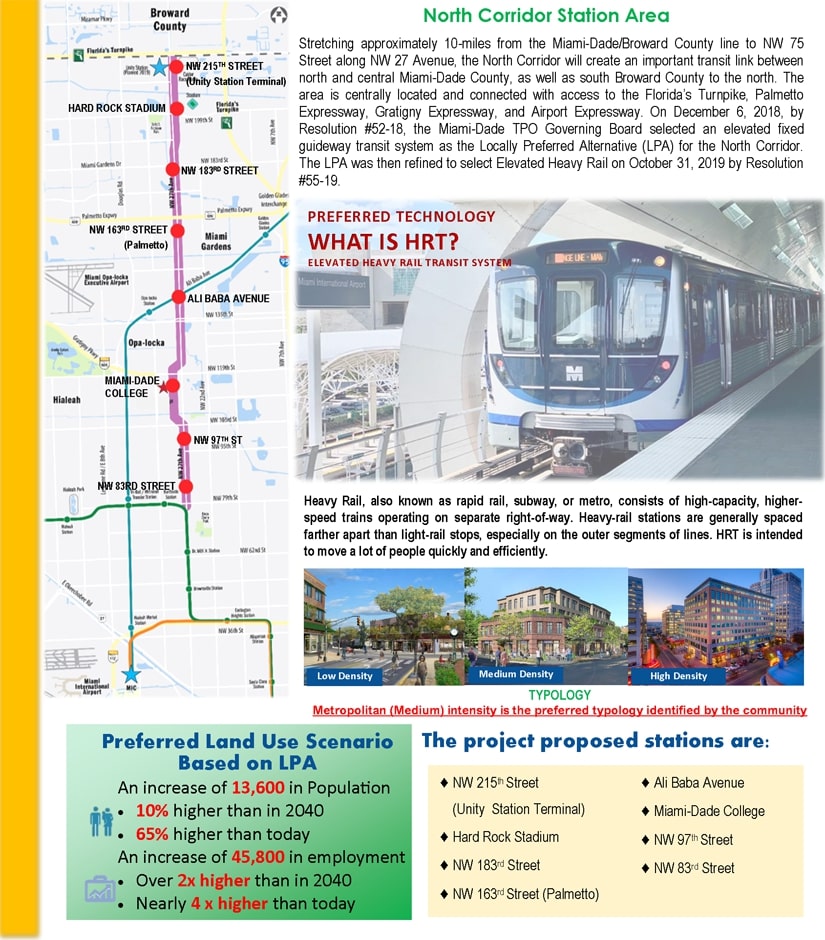