Miami to Orlando could be among the first Hyperloop routes in the country, with a travel time of just over 26 minutes.

The route was one of eleven announced as finalists today by Hyperloop One, which has hundreds of employees working on a prototype. Two or three will eventually be selected to build.

State and local officials are said to be a part of the proposal. Alice Bravo, Miami-Dade director of public works, told The Verge that the route would transport tourists between Miami and Orlando, as well as cargo from the Port of Miami.

The 26 minute trip time compares to 3 hours and 40 minutes by bus or 55 minutes by plane. Bravo also said that the hyperloop from Miami could eventually extend to Atlanta or Chicago.

“We think this is a corridor that could serve as a national stimulus,” Bravo said, “for this area of innovation and human capital intellect.”

A press release from Hyperloop One also said that Florida Department of Transportation officials are a part of the proposal. 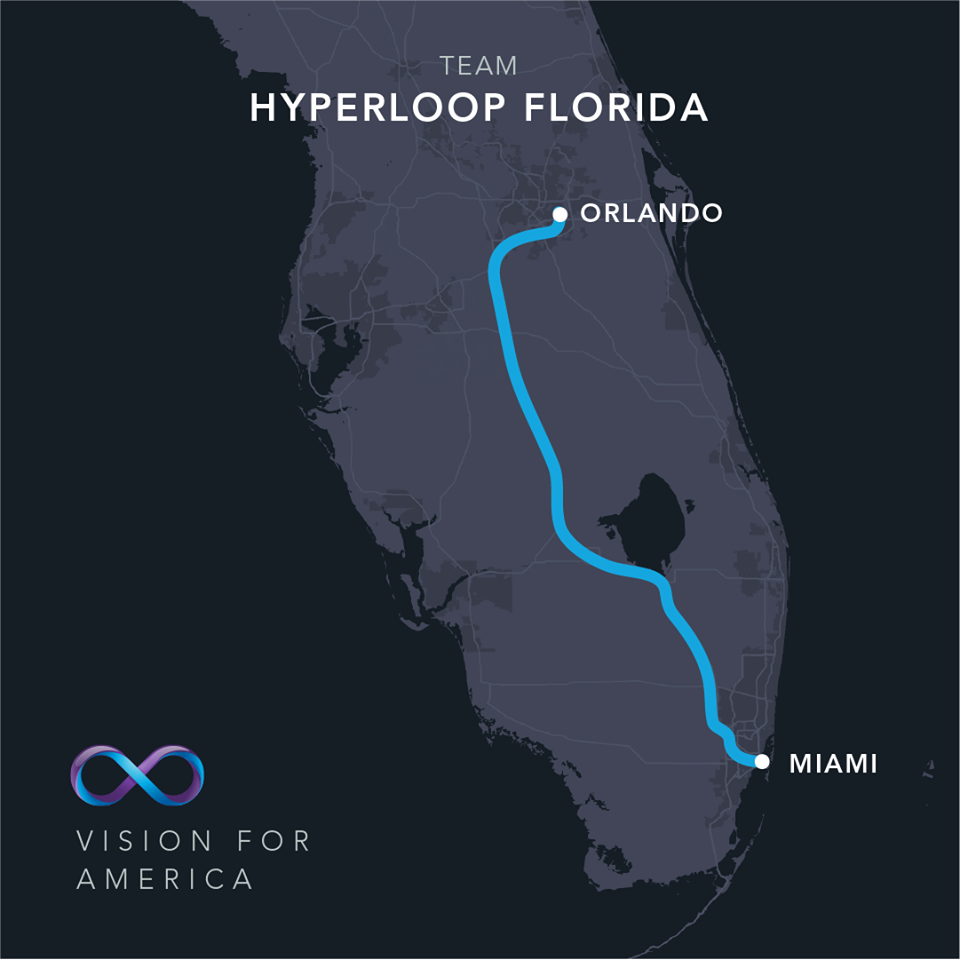 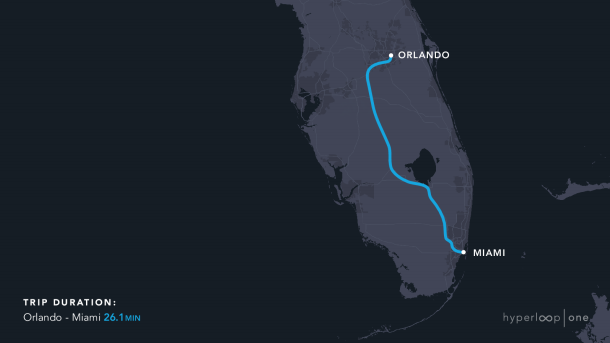 Of more than 2,600 participants in the Hyperloop One Global Challenge, 11 teams presented routes, linking 35 states and covering more than 4,200 miles. They join 24 other teams from around the globe, each vying to be among 12 finalists. Three eventual winners will work closely with Hyperloop One engineering and business development teams to explore project development and financing.

“Hyperloop One is the only company in the world building an operational commercial Hyperloop system,” said Rob Lloyd, chief executive officer of Hyperloop One. “This disruptive technology – conceived, developed and built in the U.S. – will move passengers and cargo faster, cleaner and more efficiently. It will transform transportation as we know it and create a more connected world.”

Lloyd said that by year’s end the company will have a team of 500 engineers, fabricators, scientists and other employees dedicated to bringing the technology to life. Hyperloop One, he said, will enable broad benefits across communities and markets, support sustainable manufacturing and supply chains, ease strain on existing infrastructure and improve the way millions live and work.

With Hyperloop One, passengers and cargo are loaded into a pod, and accelerate gradually via electric propulsion through a low-pressure tube. The pod quickly lifts above the track using magnetic levitation and glides at airline speeds for long distances due to ultra-low aerodynamic drag. This week, the company finalized the tube installation on its 1640-foot-long DevLoop, located in the desert outside of Las Vegas; the facility serves as an outdoor lab for its proprietary levitation, propulsion, vacuum and control technologies.

“The U.S. has always been a global innovation vanguard – driving advancements in computing, communication and media to rail, automobiles and aeronautics,” said Shervin Pishevar, executive chairman of Hyperloop One. “Now, with Hyperloop One, we are on the brink of the first great breakthrough in transportation technology of the 21st century, eliminating the barriers of time and distance and unlocking vast economic opportunities.”

“Hyperloop One is the American Dream, and it’s fast becoming an American reality,” Pishevar said.

Proposed routes that would greatly reduce passenger and cargo transport times across some of the country’s most heavily trafficked regions including Los Angeles-San Diego, Miami-Orlando and Seattle-Portland. The longest distance proposal, Cheyenne-Houston, would run 1,152 miles across four states, reducing to 1 hour and 45 minutes a journey that currently takes 17 hours by car or truck.

“The U.S. is challenged to meet the growing demands on our transportation infrastructure, with congestion costing the economy more than $160 billion per year due to wasted time and fuel,” said Tyler Duvall, a partner at McKinsey & Company. “However, new technologies are poised to drive efficiency, increase capacity, and help spur social and economic growth. To seize this opportunity, the approach to infrastructure planning must keep pace by integrating new technologies and taking long-term views of what mobility will look like in the future.”

For more information on Hyperloop One, please visit www.hyperloop-one.com.

About Hyperloop One
Hyperloop One is reinventing transportation by developing the world’s first Hyperloop, an integrated structure to move passengers and cargo between two points immediately, safely, efficiently and sustainably. Our team has the world’s leading experts in engineering, technology and transport project delivery, working in tandem with global partners and investors to make Hyperloop a reality, now. Headquartered in Los Angeles, the company is led by CEO Rob Lloyd and co-founded by Executive Chairman Shervin Pishevar and President of Engineering Josh Giegel. For more information, please visit www.hyperloop-one.com.