Tesla founder Elon Musk announced on Twitter yesterday that his Boring Company would be interested in building tunnels underneath Miami to eliminate traffic and pollution.

The tweet was in response to Miami Mayor Francis Suarez, who had invited him to visit city hall.

Miami’s tunnels would become an example to the world, Musk wrote. The solution would “solve traffic” and reduce pollution from cars stuck in congestion.

Musk also said that he had already spoken with Florida Governor Ron DeSantis last week about building the tunnels. If the Governor and Mayor want it done, “we will do it,” he said.

According to Quartz, Musk has a chance to achieve a breakthrough with tunnels by reducing the cost to build them in the U.S.

The cost to build tunnels in the U.S. is much higher than the rest of the world due to a lack of competition among contractors, government inefficiency and regulations, and unions, the website noted.

Miami has had recent success in building tunnels at a low cost – but Musk could potentially bring it even lower.

Studies had originally estimated that the 4,200-foot PortMiami twin-tunnel project would cost $3.1 billion, but the project was completed in 2014 for around $1 billion.

In Las Vegas, Musk’s The Boring Company built the Vegas Loop, with twin 4,475 foot tunnels in a loop under the Convention Center. Tesla cars will shuttle passengers through them. The total cost was $48.7 million.

Las Vegas is now pursuing a citywide network of tunnels from The Boring Company.

In recent years, FDOT decided not to build a tunnel for the I-395 replacement project through downtown Miami mainly due to costs, and is instead building a raised Signature Bridge.

An FDOT study claimed the cost to underground the highway would have been over $1.3 billion more than the bridge, bringing the cost to $2.1 billion instead of $800 million.

FDOT also expressed concern that a tunnel would need to be locked down during a hurricane due to potential flooding.

Local officials have also not taken action on a tunnel to replace the Brickell Avenue drawbridge. The bridge is the biggest trigger of traffic in downtown Miami since it is constantly being raised for marine traffic.

Government estimates have pegged the cost of the Brickell Tunnel at $1.1 billion to $1.7 billion.

Musk however appears to have much grander plans for Miami, with the possibility of a citywide tunnel network to eliminate traffic. 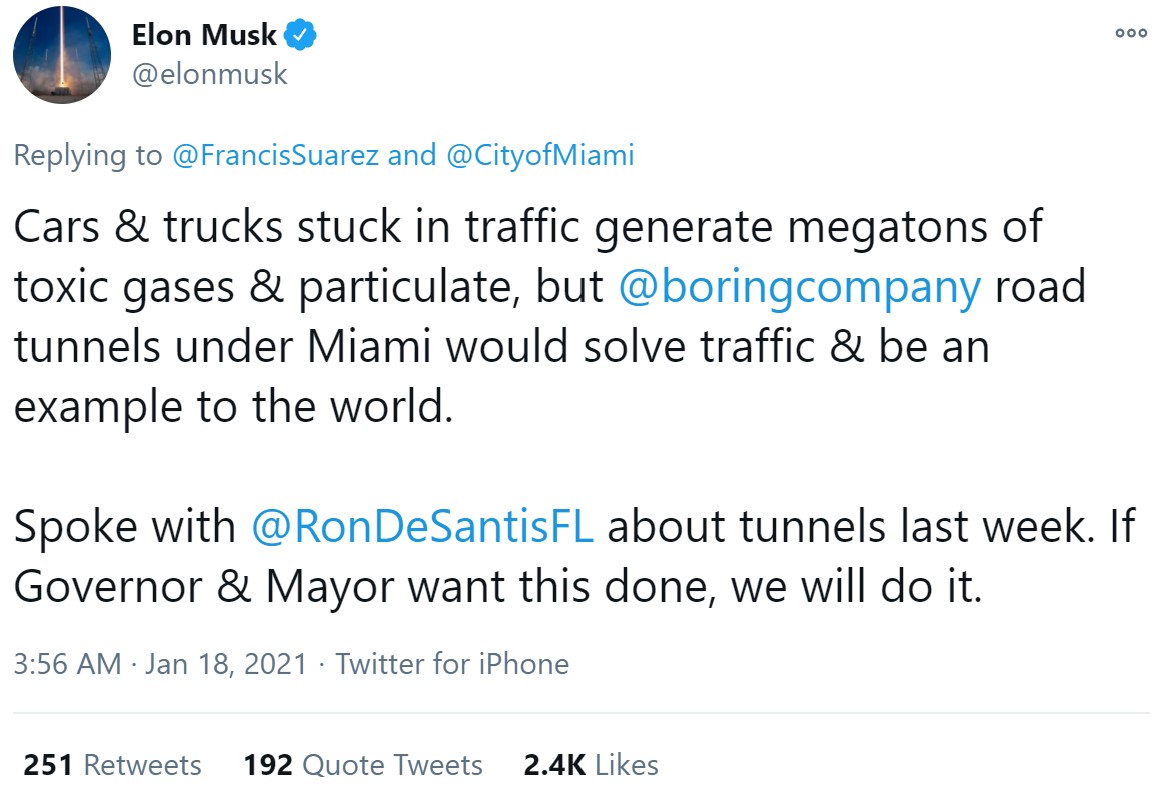