Wynwood’s Business Improvement District was shown preliminary plans of a design for the Third Avenue Woonerf at a meeting last week.

A total of three woonerfs could be built in Wynwood under an ArquitectonicaGEO master plan, but the Third Avenue Woonerf is already being designed by Brooklyn’s Local Office Landscape Architecture.

The concept would take four blocks of roadway and convert it into a pedestrian first zone which also acts as a public open space. Shared water storage and energy production is also mentioned as a possibility beneath the woonerf.

A two-way road could be converted into one-way only traffic, although some developers asked for two-way traffic to be retained, the Herald reported.

Up to 80% of the public right of way would be devoted to pedestrians, with on street parking removed. Traffic calming devices or jogs in the road would ensure a slower speed by motorists.

Four possible designs, including Promenade, Art Canvas, Garden, and Habitat were shown in the presentation. 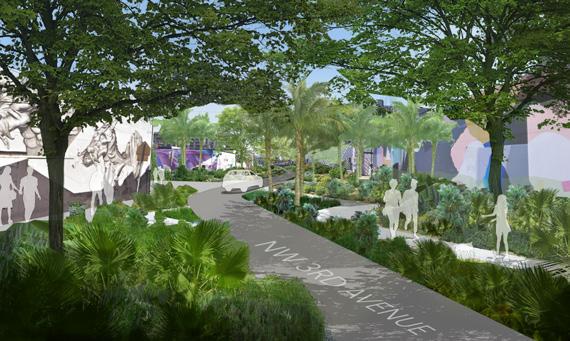