Mana: Still $45M Worth Of Public Benefits, Phasing Will Go As Originally Agreed

Despite an uproar in Wynwood, Mana will continue to provide what representatives say is $45 million worth of public benefits – as was originally  proposed, according to representatives of the developer.

The only change is in a $10 million cash payment to the Wynwood Business Improvement District in exchange for an increase in height to 24 stories. Mana will provide $7.5 million to the Overtown CRA at the request of a Miami politician, leaving just $2.5 million for Wynwood.

Mana representatives also reject claims of “phase skipping.” Mana had requested a discussion item at the last BID meeting to consider the possibility of allowing for the 24-story to be built first. A Mana representative said that they have now decided to stick to the original plan, and will build the public areas and smaller portions as the Wynwood BID requested.

Last week, Mana told Miami New Times that he had been travelling and wasn’t aware of changes to the agreement, and that he told his “guys” to take care of it,

No vote was taken at a BID meeting yesterday, since a quorum wasn’t established. Although BID members said they wouldn’t support the new plan, Mana representatives said that they would press on for a city commission vote on the project next week.

$45 million worth of public benefits, according to Mana:

The Mana Wynwood SAP will grow the arts and design community while preserving the community’s unique character. Beyond residences and commercial buildings, the Mana Wynwood SAP includes more than $45 million in public benefits to the Wynwood neighborhood and surrounding communities. The breakdown of public benefits and contributions includes nearly $7 million to the Overtown CRA, $5.5 million annually to the Omni CRA through tax increment funds, and $35 million to the Wynwood community — including $2.5 million in cash for bonus height to the Wynwood BID.

Benefits to the Wynwood community include:
Nearly 2.5 acres of centralized, public open space — the Mana Commons.
A unified and vibrant streetscape for an enhanced pedestrian experience within the SAP and bordering streets.
Extensive road improvements, including drainage and road rehabilitation.
A newly constructed fire station and rescue facility for the City of Miami.
Renovated and upgraded infrastructure serving the SAP Area and Wynwood, including drainage, sewer, fire services, and water mains.
Underground or relocated overhead FP&L power lines.
A public transit stop, which will contain bicycle racks. 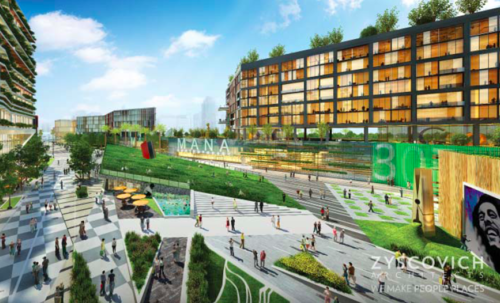