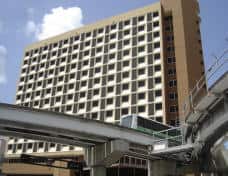 Miami-Dade County has announced that it will close the 15-Story Harry Cain public housing tower in downtown Miami. Neighbor Miami Dade College is interested in redeveloping the property, according to the Miami Herald.

The county is planning to demolish the tower.

The property is surrounded by Miami Dade College buildings on nearly all sides. A city fire station is next door, and the college is interested in that building too.

The Harry Cain building was completed in 1983, but has asbestos, mold and leaks. It includes 154 bedrooms and 154 bathrooms in 117,113 square feet of building space.

The college was told before the shutdown the the market rate for the property was $20 million. It would also face a difficult approval process in Washington.

Zoning allows a building that is much taller than 15 stories on the site.