A $400 million hotel and observation wheel called Miami Wave is being proposed to fill the FEC slip in downtown Miami.

MiamiEye Development LLC has hired a lobbyist to push the plan, according to Biscayne Times.

The observation wheel would rise 550 feet. The hotel at the base would follow a design patented by Miami resident Haskel Mayer, who is also a partner in the company proposing the plan.

There may also be space for two museums in the project, Mayer told the paper.

The FEC slip is nine acres, and has been used to dock boats since the 1890s. City officials are now considering an RFP to lease the space for marina purposes, but say development there isn’t being considered. 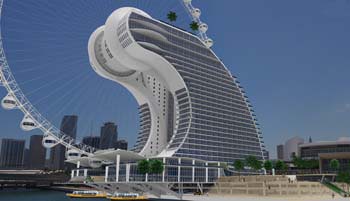