Photos of the 27-story Dade County Courthouse lit up in pink.

The building was completed in 1928 at a cost of $4 million, with innovations for the time that included underground parking.

According to a historic designation report, the tower stands 335 feet above ground and is visible for 100 miles by sea when lit up at night.

Description of Building: The Dade County Courthouse is a 27 story symmetrical building of steel frame construction. Neo-Classical in style, the building features a double square base with a central tower. The Courthouse is faced with Stone Mountain granite on the first three stories and terra cotta tiles in an accurate imitation of the granite slabs on the rest of the building. A stepped pyramid roof or ziggurat tops the structure. The building mass consists of a three-story base approximately 168 feet square, with a secondary base of three stories about 138 feet square. From the seventh to twentieth floors, the tower is a square shaft. The tower changes to an octagonal shape at the twentieth floor, with a further decrease in area at the twenty-fourth floor. The pyramid surmounting the tower is three stories in height. Surrounding the building and five feet above the sidewalk is a broad slate-paved terrace. The terrace and main floor, which is six feet above the terrace level, are reached by two flights of granite steps on the north and south facades. This raised first floor provides space for a partially excavated basement, used for parking since the building opened. The main floor of the building was originally open, equipped with folding wrought iron and bronze grilles rather than doors for security. Aluminum and glass revolving doors were installed when the building was air conditioned in the 1940s. A majority of the building’s original steel casement windows remain, although windows on several floors have been replaced. The twelfth floor, for example, now contains bronze finished, aluminum fixed windows with bronze colored solar glass. Aluminum awning windows are now found on the seventh floor. Recently, windows on the fourteenth floor were replaced with new windows that closely replicated the originals in muntin configuration. The only concession to energy conservation is a light gray tinting. Six colossal, fluted Doric columns flanked by two colossal pilasters highlight the north and south facades of the base. Similar colossal, engaged columns mark the east and west facades. Above is a full entablature with triglyphs and metopes, followed by an attic story. Six engaged columns or pilasters with Egyptian capitals adorn the secondary base, which is surmounted by a classical balustrade. Decorative plaques with classical motifs embellish the ninth and nineteenth floors. The twenty-third floor is encircled by a classical entablature, with a pediment and tympanum at the twenty-fourth floor. Except for the alteration of some windows and doors, the exterior of the Dade County Courthouse remains virtually unaltered. 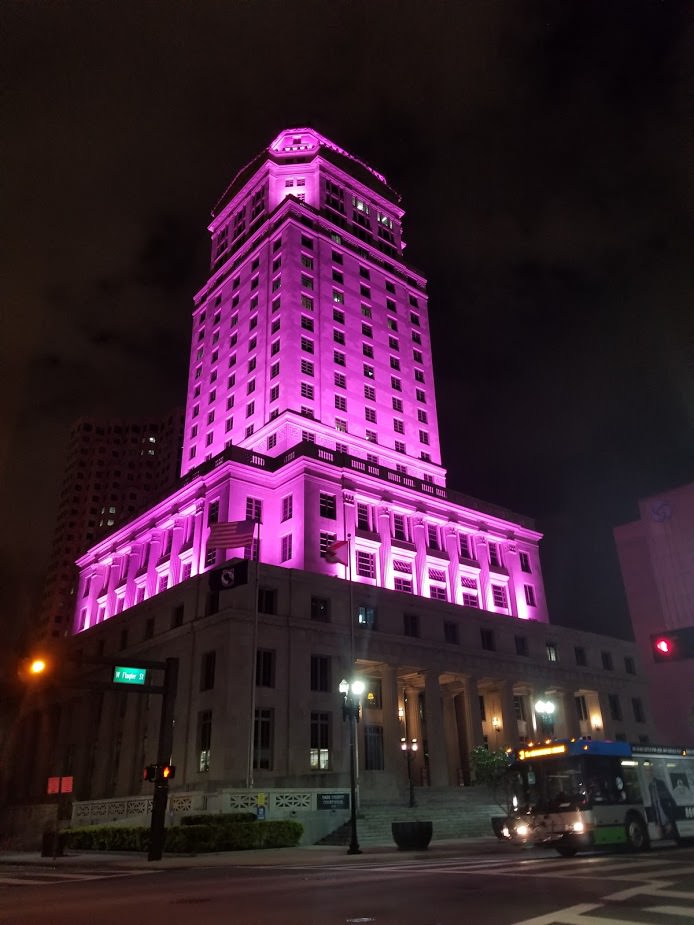 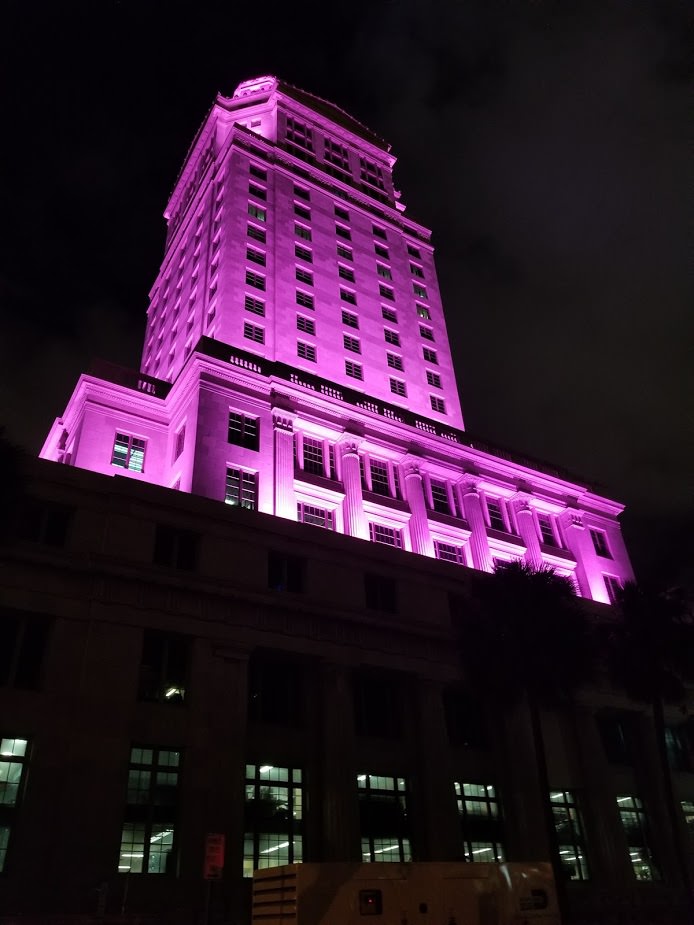 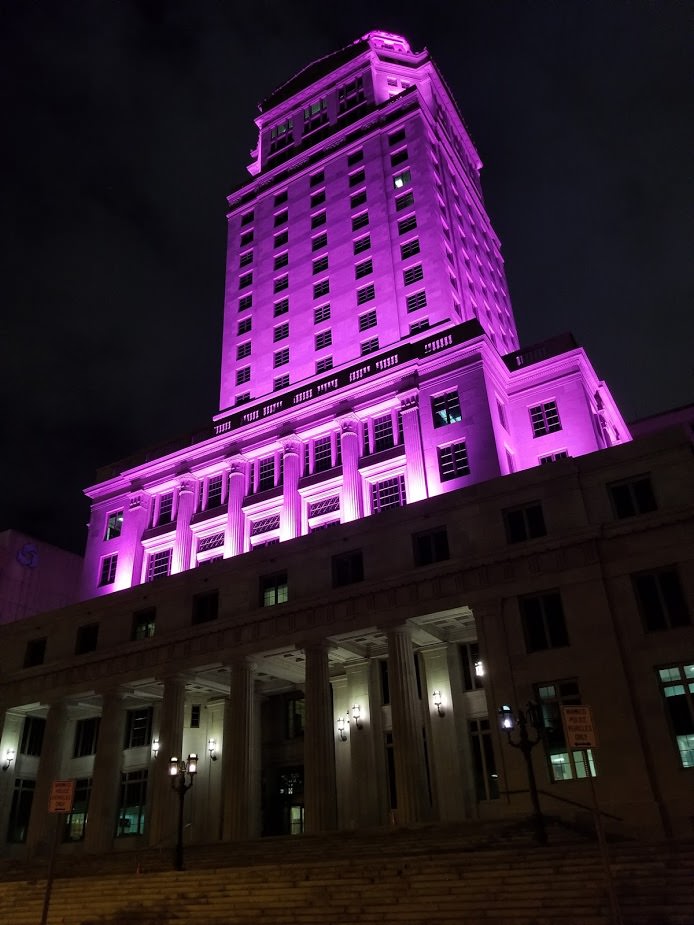 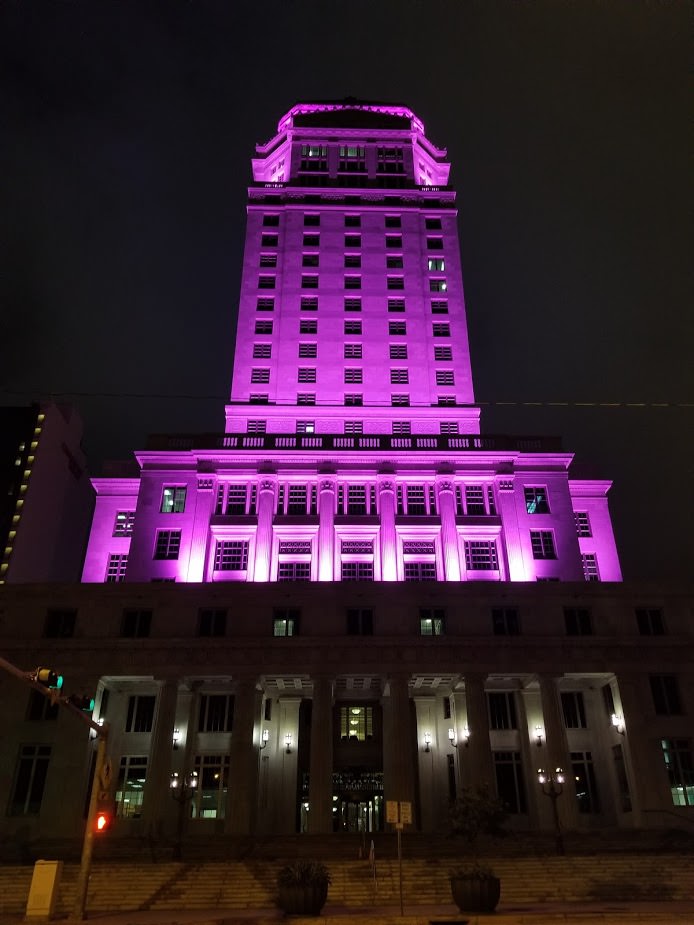