Construction at Skyrise Miami will begin in the first quarter of 2019, according to the contractor.

Brad Meltzer, the CEO of Plaza Construction told Building Design + Construction that his firm was recently selected to build the tower. Excavation at the site began last month.

Skyrise will become the tallest building in Florida. It is approved by the FAA at 1,045 feet above ground and 1,049 feet above sea level.

Legends, a joint venture between the Dallas Cowboys and New York Yankees, will operate the tower when completed. Completion is scheduled for 2023.

Attractions in the vertical entertainment complex will include on open deck called Skywalk 908 feet above ground, a transparent sky deck at 866 feet called Skyledge, and a transparent Skyglide. There will also be base jumping, a float tunnel that allows visitors to rise to the top of the tower, a 540 foot free-fall Skydrop, and the world’s tallest rotating observation wheel.

Restaurants, nightclubs and catering halls are also being built in the tower.

Planning for construction is made more complicated by the fact that there are no uses in the first 500 feet of the tower, Meltzer said. That will require a structural steel and concrete design that hasn’t been tried before in the area.

Arquitectonica is the architect. This will be the eight project that Plaza and Arquitectonica have worked on together (including the recently completed Paraiso Bay).

Berkowitz Development Group is the developer. The company has developed over 1.5 sf of office and retail. 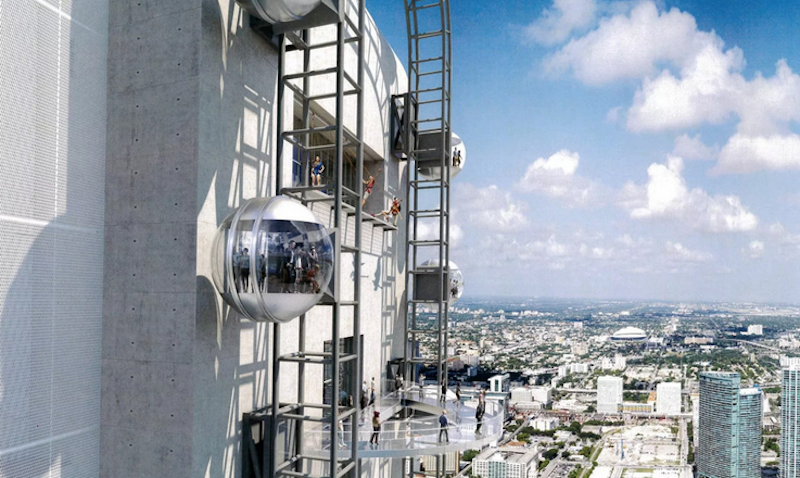