It could soon become easier to build taller towers in downtown Miami thanks to new collaboration between Dade’s aviation department and the FAA.

Documents obtained by TNM reveal that the two agencies are now working together to update and unify flight rules and height restrictions in the area. Officials say that the effort will eliminate confusion about building heights, while streamlining the approval process.

As part of the updated rules, a portion of downtown Miami (including Brickell) will see an increased height limit of 1,049 feet above sea level. This area was previously limited to 1,010 feet. Swire Properties has already received approval to build One Brickell City Centre at 1,049 feet under the new rules.

Approval could also become faster and less confusing. The FAA now routinely issues ‘Notice of Presumed Hazard’ letters for many towers proposed in downtown, even though most are eventually approved. That is due to a disparity between MIA’s height zoning ordinance and the  FAA’s Obstruction Evaluation Group reviews, which officials hope to resolve.

MIA’s height zoning ordinance is already so strict that a controversial new policy proposed by the FAA to account for One Engine Inoperative situations is already covered. In fact, heights in downtown can be increased even if the policy is implemented, officials say.

Tenant airlines at MIA, including American Airlines, Atlas Air, British Airways, Delta, Lufthansa have already been briefed on the plan and can be accommodated. Some of the changes to accommodate towers at 1,049 feet instead of 1,010 won’t actually result in any operational changes, since policy has been to round up building heights by 100 feet when considering flight procedures. 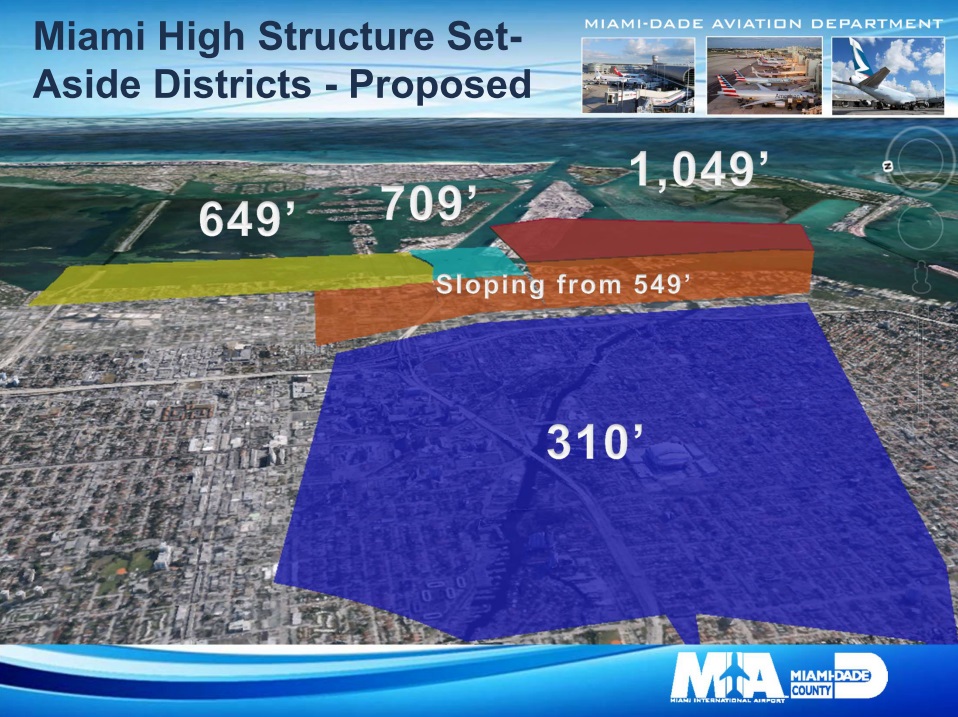