Below, the route for the Miami ePrix through downtown Miami:

The eight turn, 2.17km circuit is located in Downtown Miami, Florida, along Biscayne Bay around the streets of the AmericanAirlines Arena, home to the Miami Heat NBA basketball team. Produced by leading track design company Ayesa, it is the setting for the fifth race in the inaugural Formula E season and the first of two events in the US.

Mayor of Miami, Tomas Regalado, said: “I’m pleased to be welcoming Formula E to Miami, the location of the first electric single-seater race in America. We are proud to be among the elite group of international cities hosting the FIA Formula E Championship.

“Racers will be back in Miami – this event will help to make Miami more of a sports city. In addition, we will show the younger generations that you may have of motor racing without noise or pollution. ”

Mayor of Miami-Dade County, Carlos Gimenez said: “The FIA Miami ePrix is precisely the type of international event that will showcase Miami-Dade as a world-class destination.”

All Formula E events take place in one-day in order to minimise disruption to the city. Formula E CEO Alejandro Agag, speaking at a press conference held at the Pérez Art Museum of Miami, said: “We’re delighted to be officially unveiling the circuit for the Miami ePrix, the host for round five of the FIA Formula E Championship. Having two races in the US is very important to us with America’s rich motorsport heritage and the States being such an influential and burgeoning market for electric vehicles.”

Agag added: “Miami was chosen because it shares the values that are the basis of our championship. It’s a city that looks to the future, experimenting with new technologies and is geared to sustainable development as well as a place where you want to have fun.” 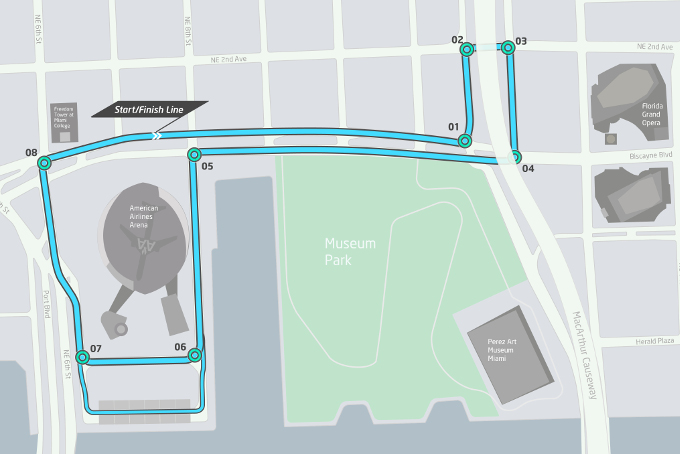