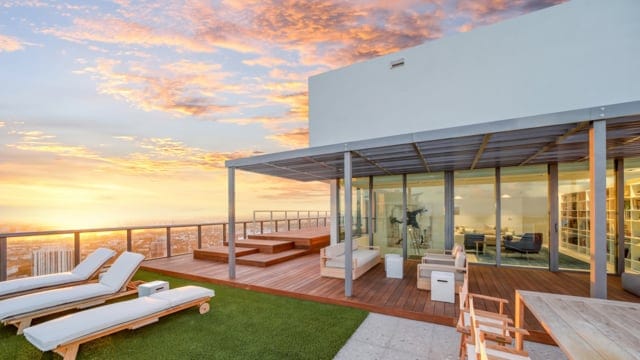 David Guetta’s 2-story penthouse at Paraiso Bay was recently completed, and the unit has been rented for $18,000 per month after only two days on the market.

Guetta paid $6 million for the penthouse in 2015, which was was entirely custom-designed by Piero Lissoni. It includes three bedroom and 4.5 bathrooms, spanning two levels on the 53rd and 54th floors of Paraiso Bay.

The first floor includes 2,387 square feet of interior space with a 429-square-foot outdoor terrace — featuring a double-height foyer and wrap-around staircase, a master bedroom, living room and open kitchen. The second floor features a 373-square-foot den and a 2,121-square-foot roof terrace, which boasts a private deck flaunting a pool, summer kitchen and views of Biscayne Bay.

A video of the interior of the newly completed unit was released by The Related Group, Piero Lissoni, and Freud Group’s Zelda Freud and Michael Wiesenfeld who brokered the deal.

“The development brings together the best of everything that makes the city so magical – the ocean, cuisine, design, art and culture,” says Carlos Rosso, President of The Related Group’s Condominium Development Division. “With its endless list of amenities, impressive oceanfront location and close proximity to Miami Beach, the Miami Design District and Brickell, it’s no wonder we’ve had so many A-listers purchase residences here.”